My car has been on some sort of "Stage 2" setup for 3 years now. I knew my next step was going to be FlexFuel, but it took me awhile to get to the point where I knew how I wanted to do it and what other mods to do that would be easiest whilst doing FlexFuel anyways. The floodgates opened up with possibilities but I still ended up going fairly conservative. I'm in no rush to end the life of the EJ257 under the hood, so reliability while still increasing performance was my main goal. 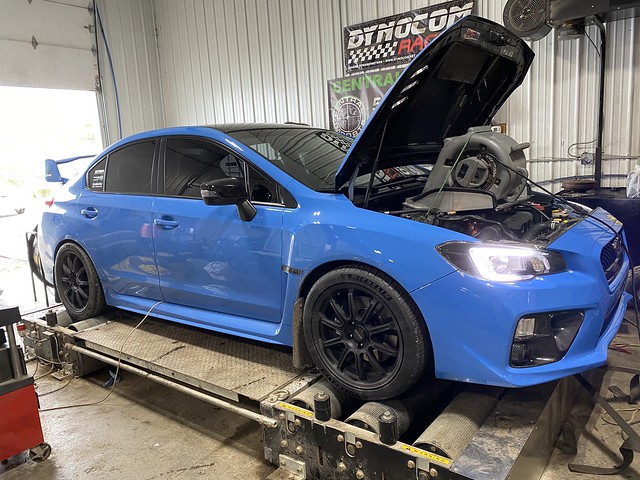 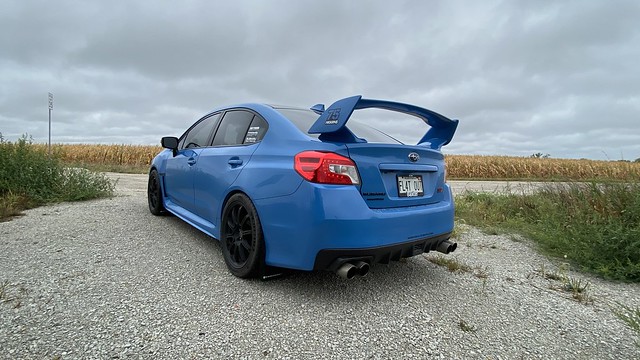 The end result has 357whp and 384wtq on E85. Figures are about 50 points lower on 91 Octane, so I'm very happy with the gains from adding some corn juice to the diet. At the heart of these gains is the COBB FlexFuel kit along with ID1050X Injectors, DW300c Fuel Pump, and some other bits we tweaked. The TGVs and Secondary Air Pump have also been deleted, too. To ensure proper cooling, we added a coolant line to Cylinder #4 and then buttoned it all up for some tuning. I drove from Omaha to Des Moines to meet with Graham (Boosted Performance Tuning) and he was great to work with as always. We backed off a bit on the torque figures since I'm still on a stock clutch for now. He said this Dyno reads a little light on Torque and that I'm probably making closer to the low 400s to the wheels for that. I can certainly feel it! 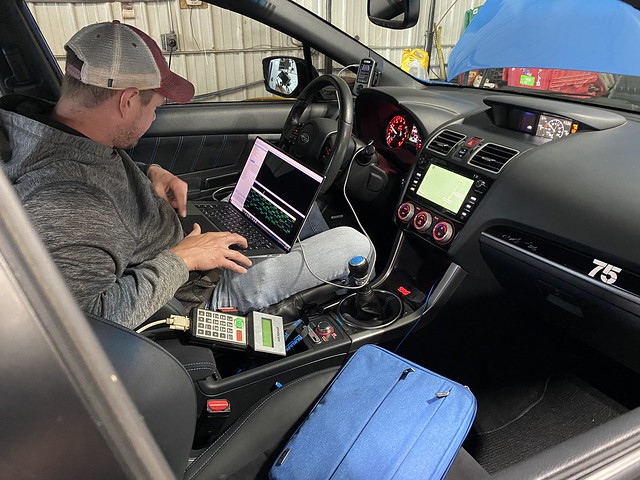 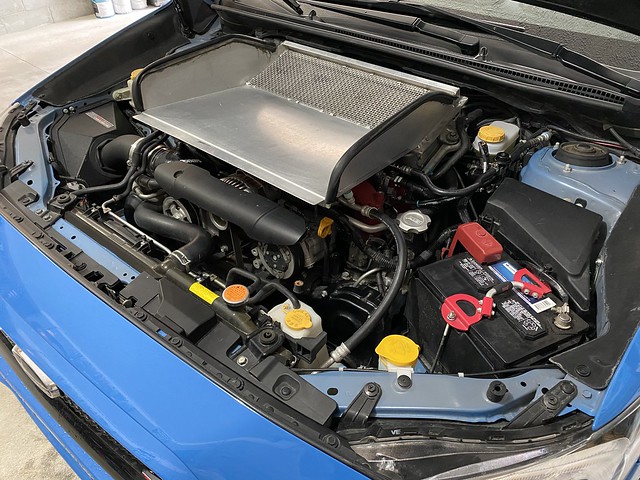 This bump in power is even more fun with the grippy tires I picked up earlier this summer. 2020 Plans are really starting to compliment eachother now and just in time for the 5-Year Anniversary. Got a few more touches to finish up and I should have a video of this build in October to cap it all off.
[SIGPIC][/SIGPIC]
B

Yup! Stock turbo. Stock clutch (while it lasts!). Stock block. I've been pretty cautious with stuff knowing the weak points of the EJ257. AOS helps keep oil where it's supposed to be. Coolant is more evenly distributed through the block with the additional line we added to the 4th Cyinder. I'd like to do Head Studs at some point and I'll need to upgrade the clutch soon, too.
[SIGPIC][/SIGPIC]

Does the air duct/tray that mounts to the TMIC from your picture have a specific name? Is it a legit aftermarket piece you can buy, or did you fabricate it yourself? If aftermarket, are they available for the GD chassis? I've never personally seen that before. Have you tested if it helps in any way, shape, or form?

I wish someone else made these intercooler shrouds! But I got together with a friend who can weld and fabricate stuff like this. We worked together a few years ago to make this specifically for my car and my hood, so unless your 2004 STI and the hood you're running has the same dimensions as this (which I would bet it doesn't) I don't think it would fit.

Still, I get enough questions about that shroud that I've resumed work on making adjustments to my initial design so we can produce more of these. I know there are plenty of STI owners who have this kind of hood that could use this.

Reverend said:
I wish someone else made these intercooler shrouds! But I got together with a friend who can weld and fabricate stuff like this. We worked together a few years ago to make this specifically for my car and my hood, so unless your 2004 STI and the hood you're running has the same dimensions as this (which I would bet it doesn't) I don't think it would fit.

Still, I get enough questions about that shroud that I've resumed work on making adjustments to my initial design so we can produce more of these. I know there are plenty of STI owners who have this kind of hood that could use this.

This is great to see! I love custom modifications that are functional. We went on slightly different paths, however, the results should be similar: 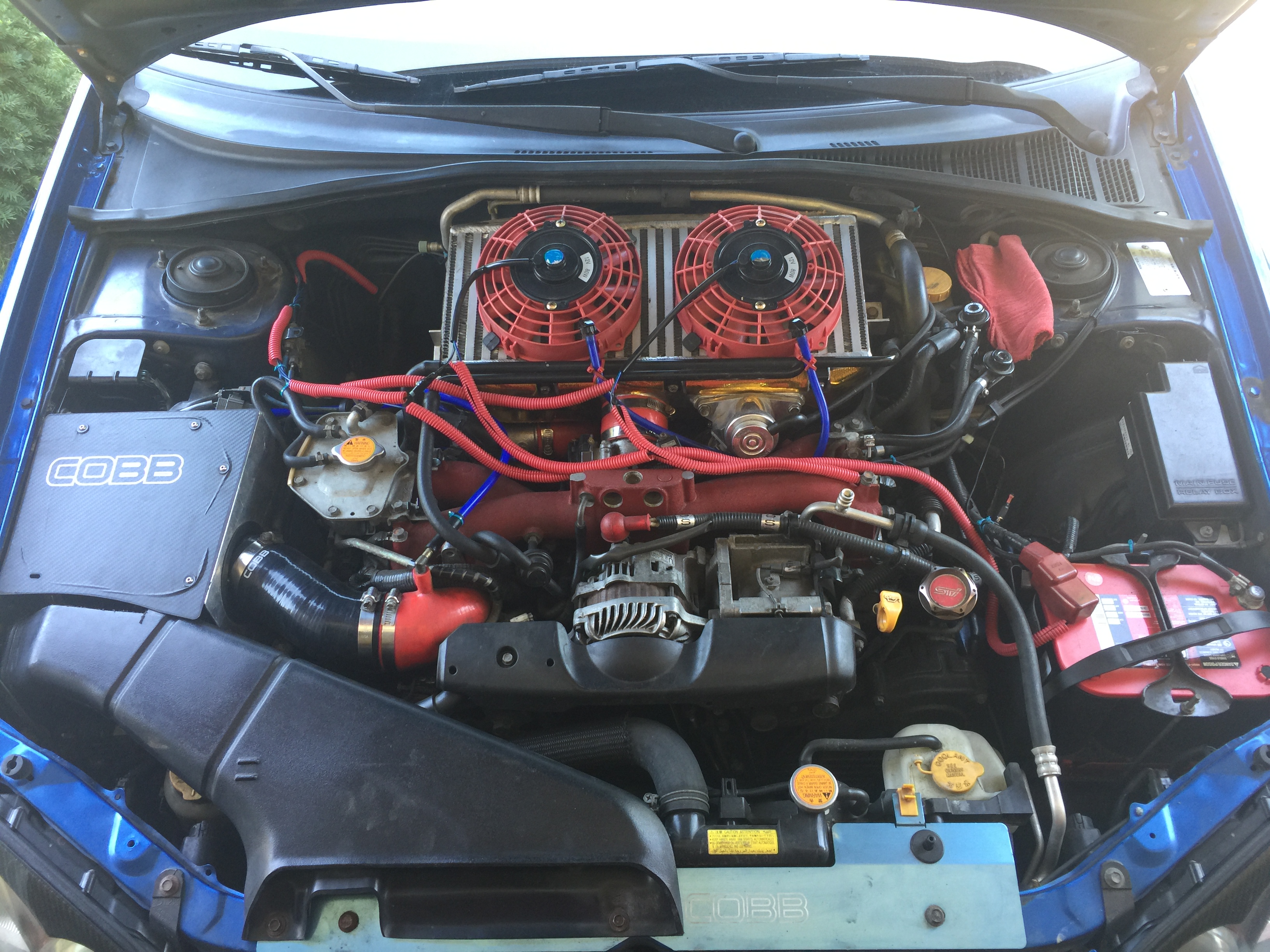 Hey STI fam. Figured I'd update the build. Not much has changed since the tune, but I did replace my worn-out endlinks for Torque Solutions. Also looking at getting a new clutch soon since the FlexFuel tune has been dialed back for the stock clutch I'm still on. There's still some left, but with around 50k miles on it and more power it's putting down I get the feeling it won't be too much longer before it's shot. Looking at South Bend (Stage 2) clutch. I've got two friends using the same setup and they really like em. Open to other suggestions.

Last October marked 5 years with this whip. To mark that occasion, I made my "Higgins Blue" STI celebrate the #75 Subaru's dominant US Rallying career by printing every championship year along the bottom part of the rear window. In the center it simply reads David Higgins - Craig Drew National Champions. 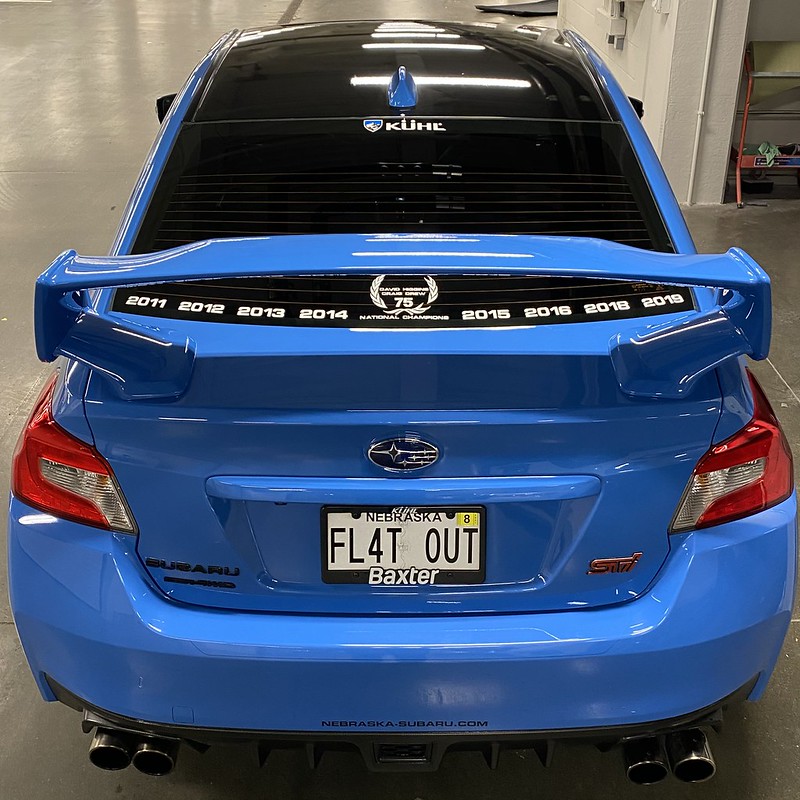 Managed to have a blast (no surprise) at Rallycross last season. I haven't had a chance to make it out to an event this year yet. Dad life has absorbed most of my free time, but I'm hoping to make it out to another one soon. Had fun driving my STI more this winter since my Baja was down. Forgot how much fun this thing is in the snow. Thankfully since I work at Subaru Retailer I was able to wash it frequently to keep the road salt off of it. 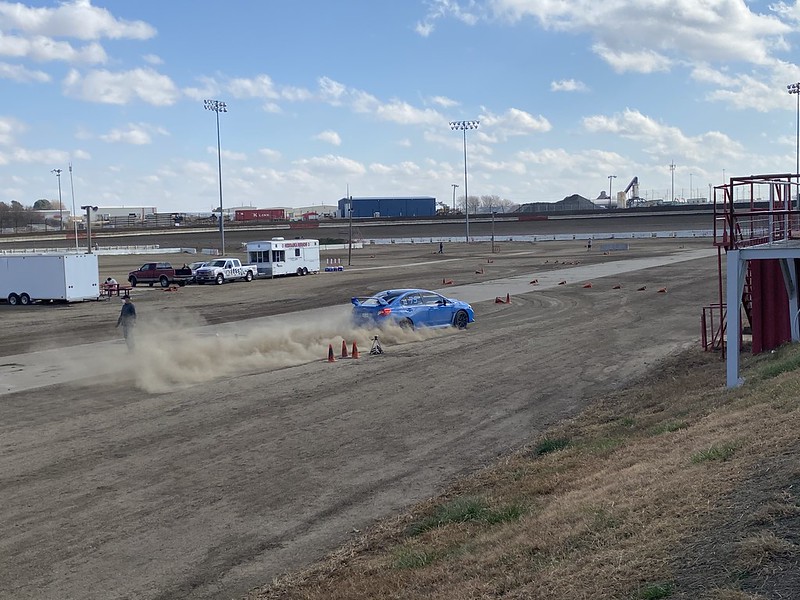 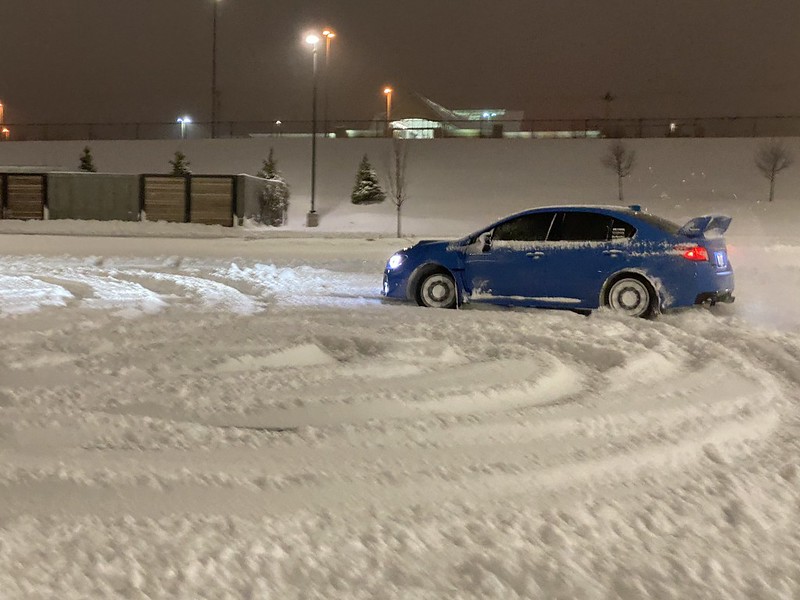 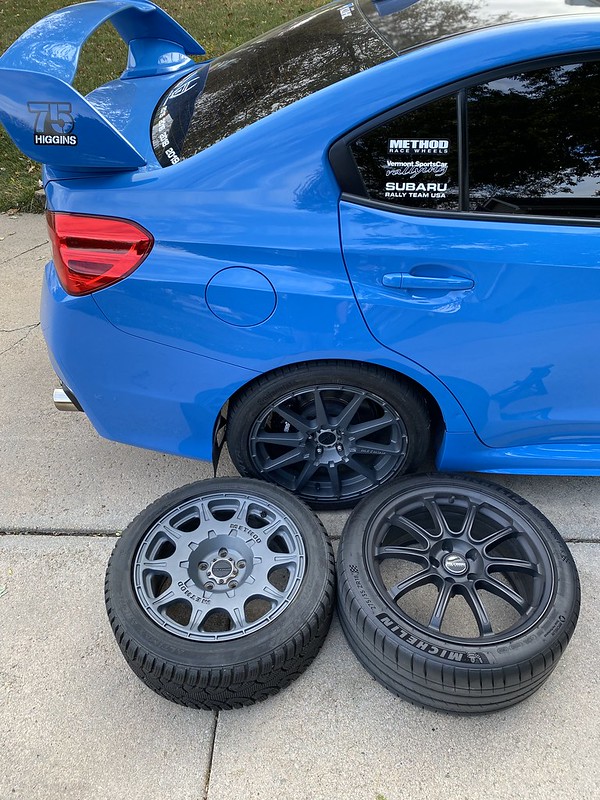 Staff member
Looks great dude! Thanks for the update.

My Higgins Blue STI is just about to roll over 60k Miles. It's nearly 7 years old at this point but the goal remains the same: Make a car that celebrates the career of David Higgins and Craig Drew that is also fun to drive and push while also being able to handle daily use. It's easy to find a parts catalogue and start throwing options at a car, but I have found it to be both rewarding and difficult to strike a good balance to continue to make this car a joy to drive and own.

It's now running a COBB FlexFuel setup with ID1050X injectors, DW300 Fuel Pump, GrimmSpeed Stealth Box CAI, GrimmSpeed EBCS, GrimmSpeed Catless Downpipe, ARK Performance GRiP Exhaust, and has the TGVs and EGR deleted. I also performed a coolant mod for proper circulation to cylinder #4 and installed an IAG Competition Series Air-Oil Separator. There is a VSC Performance Transmission Mount and Pitch Stop mount installed along with a South Bend Clutch (Daily Stage 2) on the OEM Flywheel. Suspension is currently the OEM STI Dampers with RaceComp Engineering "Yellow" lowering springs. Brakes are stock Brembos (replaced pads and rotors at 52k miles) and there is a set of APR Carbon Fiber Brake Duct Cooling intakes that run air from the fog light bezels to the front brake rotors.

On the Outside, the ViS Racing Carbon Fiber hood (painted) is still there along with VSC Performance Mud Flaps (replaced my Rally Armors) and the crown jewel: the VSC Performance Motorsports Wing. I'm still running my favorite Method Wheels depending on the season and application. 501s for All-Season, 502s for winter / rallycross, and 503s for summer / autocross.

All-in-all it's still coming together and while I enjoy each new change, they get me thinking about the next thing. As I write this, my local rallycross program is about to change where events are held as the racetrack they've been at for the last 10 years or so is unfortunately closing. The condition of the site there is much smoother than other "lets go in a grass field" sites I've seen and I'm not sure if this car can handle the harsher conditions and steeper approach / departure angles to warrant continuing to rallycross with it. As such, I'm starting to refocus the car to do more Autocross and (eventually) some track days. I know that to make a dedicated track car would mean ditching the idea of this still being a daily dad-mobile, but it would be nice to get the car to at least a few track days without worrying about reliability.

As such, my next set of mods I have my sights set on have cooling in mind. The brakes are fine thanks to the APR kit, but general engine and oil cooling will be my next areas of focus.

I'm still a big rally fan and the main reason for getting that massive carbon fiber rear wing wasn't to be an attention grabber but rather to continue to make this car a celebration of their career. David Higgins and Craig Drew secured 8 National Championships in the US together and many of those wins had this wing strapped to the back of their car. So when the chance came to put one on my car, I had to jump on it. Seth from Vermont SportsCar was there to help install it at the 2022 Rally in the 100 Acre Wood and David Higgins was also there so he could put his seal of approval on the latest addition to "his car". I'm still trying to figure out how to get the "75" back on my car somewhere so that'll come soon when I settle on an idea for it.

In the meantime, here's some photos of my car since my last update. It's been a riot to drive and I like increasing it's performance level to meet my needs as my abilities improve behind the wheel. More Driver Mod leads to more Car Mods and that progression has been so much fun! 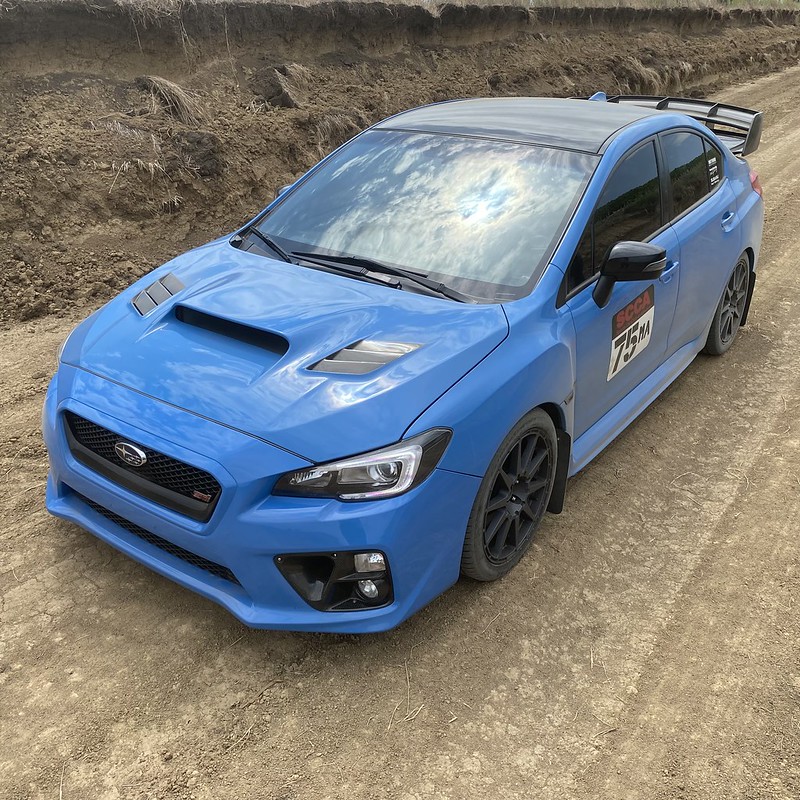 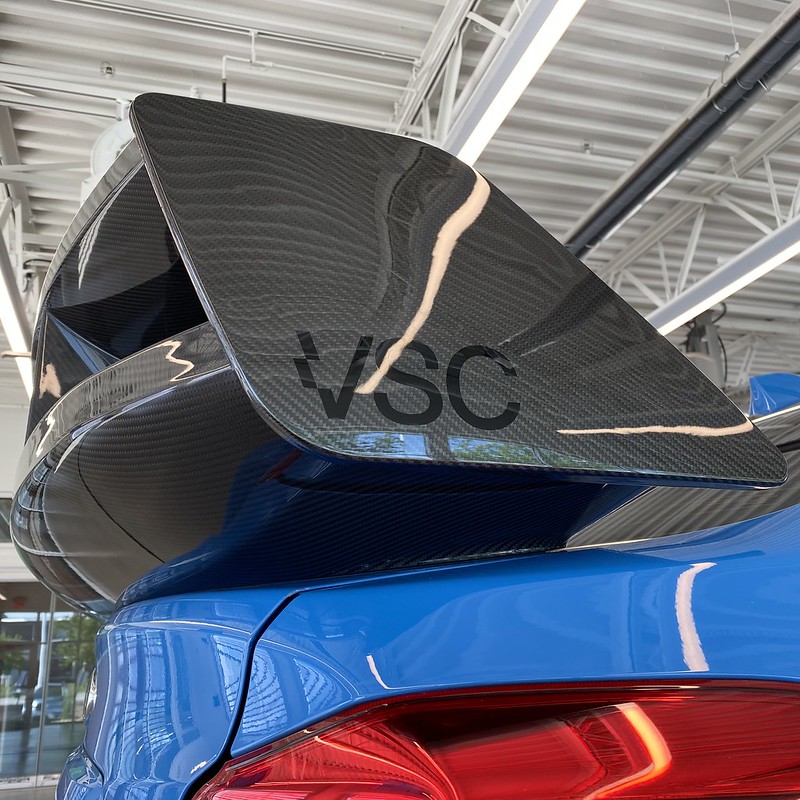 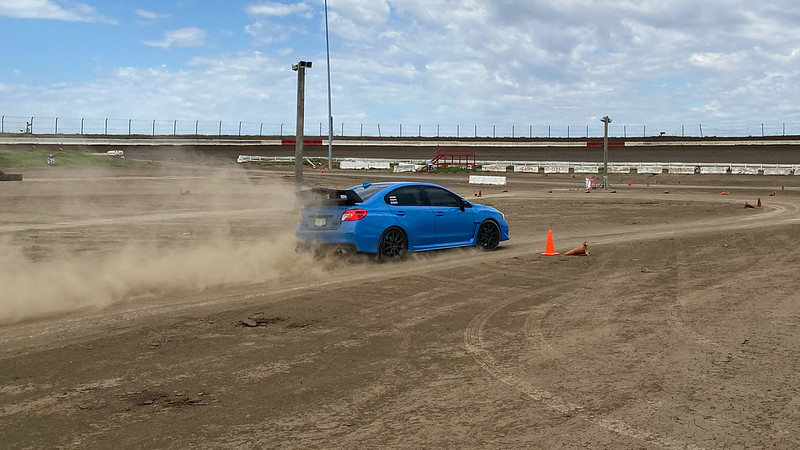 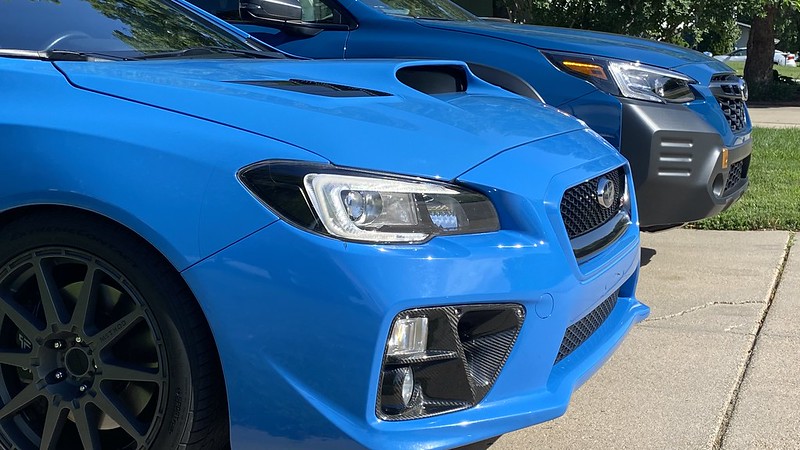 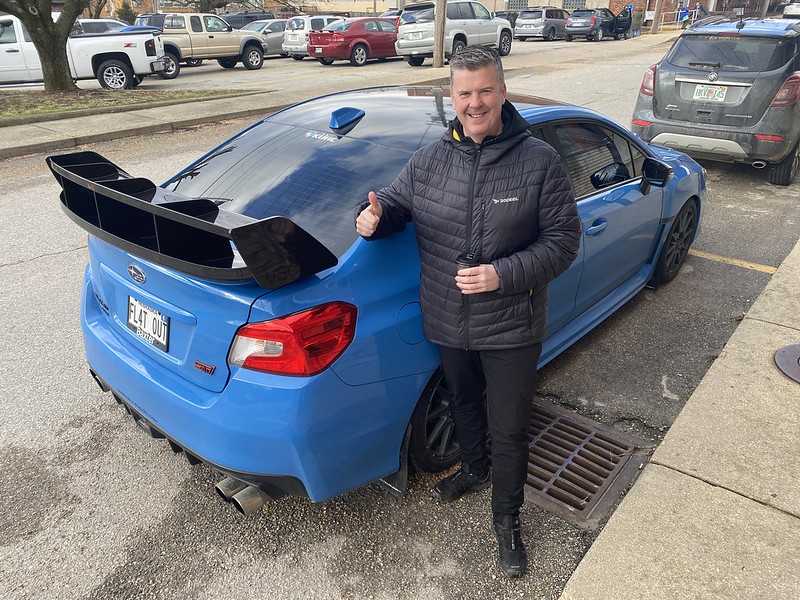 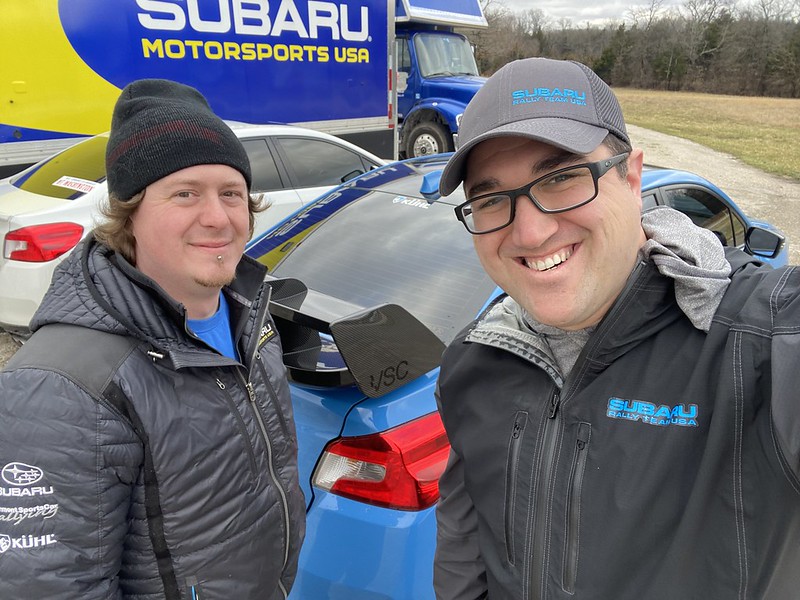 [SIGPIC][/SIGPIC]
You must log in or register to reply here.