Jan 15, 2021
The world's #1 resource for everything Subaru Tecnica International, with a core focus on supporting every individual in a positive environment, regardless of experience and technical ability.
Join For Free Today!
We'd Love To Meet You!!
Menu
Log in
Register
Install the app
You are using an out of date browser. It may not display this or other websites correctly.
You should upgrade or use an alternative browser.

Hello Everyone! My name is Heather. I am originally from the North shore of Lake Tahoe (I claim the Nevada side :lol, but live in Vermont. To make a long story short, I was a Subaru dealer technician for about 7 years before I was able to land my first interview with Vermont SportsCar (Subaru Rally Team USA) in Los Angeles. After the 9 hour drive and interview, it was decided that I would move to Vermont to pursue a full time position with them. After about 4 months of working at Burlington Subaru and border-line harassing VT Car for the job, I was offered the position where I learned I was the first female technician for Subaru Rally Team USA. You can read a little more in depth about my automotive journey in the newest Drive Performance magazine by Subaru http://dp.subaru.com/dp15-1-love-for-impreza-turned-dreams-into-reality I was asked to try a hand at service writing at the local dealership in Burlington, VT. I've been doing that now for about 3 months. And quite frankly, I hate it with a fiery passion :lol: Luckily I still get to play on race cars on occasion with DirtFish to help keep my sanity in tact.
View attachment 7554 View attachment 7555 View attachment 7556 View attachment 7557 View attachment 7558

On a personal level, I'm pretty easy going. I can be a vulgar and vile creature at the appropriate times. After all, working in a shop only nurtures that kind of temperament. I play well with others and never claim to know everything there is to know about Subarus. I do some part time modeling where you can see me in the 2017 Subaru gear catalog, the Fl4t LV Subaru calendar for 2015, and a couple other smaller magazines. I also have a small segment in a Subaru documentary that is planning on a public release this fall called "In Between the Lines". (You can find them on IG @betweenthelinesmovie) I am NOT a feminist, though I HIGHLY support women being as savage as they can without feeling like they need to sacrifice their femininity. I support "car girls" (and guys of coarse) of ALL levels, even the people who just do cosmetic mods. We all started somewhere, right? I do this in hopes that it would show support of a new interest and perhaps help them push to learn more of the mechanics side about our cars. 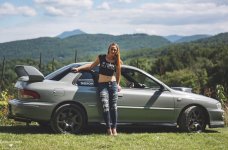 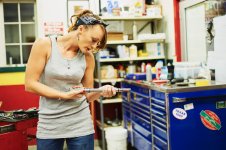 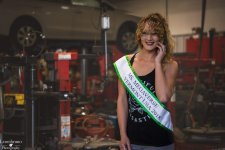 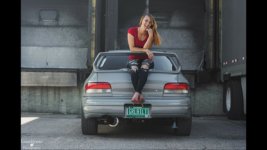 As far as my car goes....I drive a 2000 2.5RS (yes, its a 2 door). When I first bought the car, I hated it. I only got it because that as what my boyfriend at the time thought was cool. I knew nothing about cars. By me basically buying a vehicle with a blown motor (that I obviously knew nothing about), I was forced to learn about cars, eventually causing me to end up where I am today. It was originally sedona red. But after a hit and run accident, I decided to change the color to gloss concrete (the Scion TC gray color). I only had a couple days to prep and paint it before I had to drive to LA for my rally team interview. So now, after a couple years of flaking paint, it is currently stripped to bare metal. The projected finish time for it will be the third week of May. Im a sucker for EJ20's (I know, I know, this is an STi forum), so thats the engine that is in it. I had 4.44 with LSD rear end in it, but after a daily 2 hour commute, I got tired of the high rpm's and fuel consumption. Not to mention that I don't auto cross it enough for it to really be worth it. Since its a daily, it just has STi struts and springs and sway car. It has a VF39 at 17 lbs with the STi pinks and walboro fuel pump to support it. Its still top mounted. I have some other fun rare interior pieces in it as well. Its projected HP is about 270 to the wheels, so its pretty fun for a light little car. I also have a acadia green 98 RS that is (almost) fully caged. I'll be saving the coilovers, front mount, and other fun go fast parts for the race car. Don't hate me too much, but it'll be powered with an RB26. 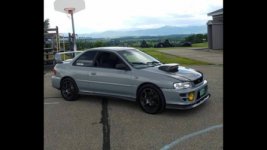 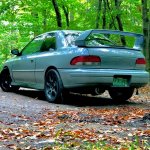 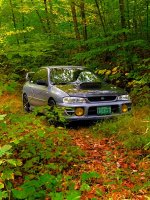 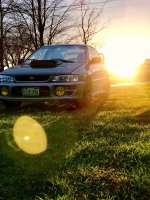 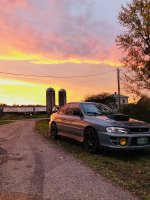 Thank for reading and I look forward to being a part of this community! You can find me on IG @miss_shift
Gas pedal is on the right

First and foremost, welcome to IGOTASTI!!!! You're going to absolutely love it here!!! Awesome story with an awesome car. I want to see more pictures of both rides!!!! :tup:

Alin said:
First and foremost, welcome to IGOTASTI!!!! You're going to absolutely love it here!!! Awesome story with an awesome car. I want to see more pictures of both rides!!!! :tup:
Click to expand...

I agree with all of the above.
15 GBP STi

We're super excited to be teaming up with you.

*Ask about becoming a Lifetime Platinum Member Today*
“If one day, the speed kills me, do not cry because I was smiling.” ​

Welcome to the family and that's a very nice car you have there.

Sent from my SM-G955U using Tapatalk
You must log in or register to reply here.