No, I'm not starting my own business out of my garage... but I do have quite a "Subie Shrine" in there! I'm kinda proud of everything I've accumulated so far and figured I'd share a few of my favorite parts. 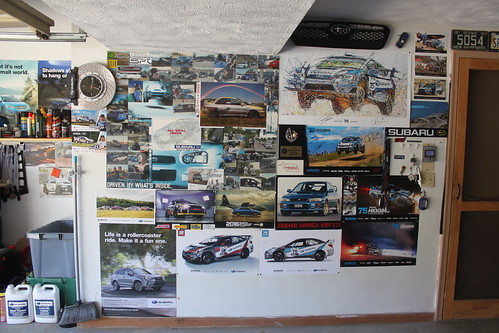 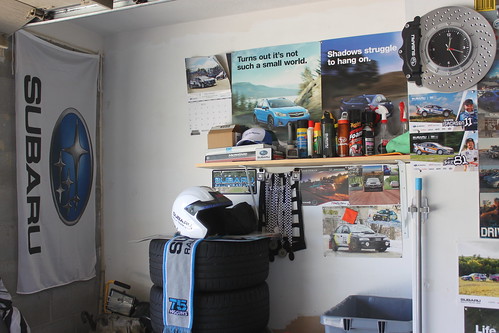 This is the bulk of it. This side of the garage is where my 2016 WRX STI Series.HyperBlue sleeps every night, so I wanted to surround it with as much Subaru-ness as possible. At the heart of it is a big plexi-glass covered poster that was part of a display in the early 2000s at Stan Olsen Subaru. It used to have Lance Armstrong alongside a buncha Subaru pictures making some kind of link between "performance values" or something like that. It was kind of a big collage of Subaru and Armstrong pictures, so I took that idea and made my own collage. I left the Subaru bits exposed and covered up all the Armstrong parts with photos from local Subaru meets held since 2012. It's pretty neat to see all the great things we've done together in one spot. There's signatures from Sverre Isachsen, Bucky Lasek, Nick Roberts, and David Higgins throughout the wall mixed in with other posters I've picked up from my dealership and events.

To the left of all that there's a storage spot for my spare tires. I also keep a lot of auto detailing supplies on that shelf there, but there's more Subaru-ness in that corner, too. Tied to a window net are medals I've won doing rallycross with the NRSCCA. I didn't think I'd accumulate that many in the 2 years I've been competing! 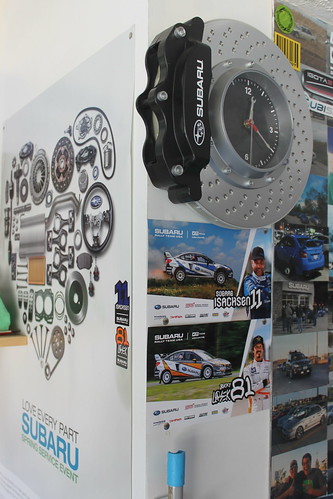 On the corner of the main wall is a neat Brake Rotor / Caliper clock that my manager gave to me. There's also a cool poster from our service department with a heart made from Subaru parts as well as some driver cards from SRT USA's 2016 Rallycross Program. 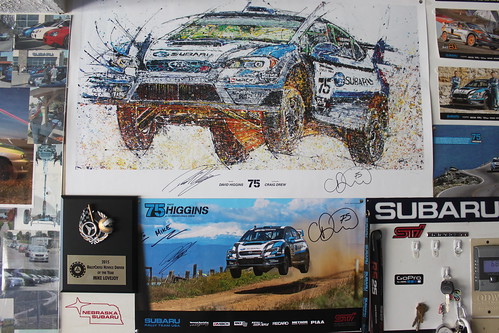 I'm probably most proud of the signed bits I've managed to nab from David Higgins and Craig Drew. It's no secret that I'm a big fan of theirs so much of my wall is covered in the number "75". The print in the middle is of artwork commissioned for Subaru by Ian Cook (Pop Bang Colour). It is 156/300 that were signed to commemorate Higgins and Drew's perfect season in 2015. There's also a poster from that season signed below it.

In March of 2016 I went to the Rally in the 100 Acre Wood and brought my "Higgins Blue" STI with me. I ran into David at a gas station and he was happy to see the car flying his number on the wing. It was a pretty awesome experience meeting him for the first time like that. Last month when my managers went to the Subaru National Business Conference, they met David and Craig signing autographs. When they mentioned they knew me, Higgins signed a postcard with some clear instructions about my car. "Look after that car of mine, bud!" 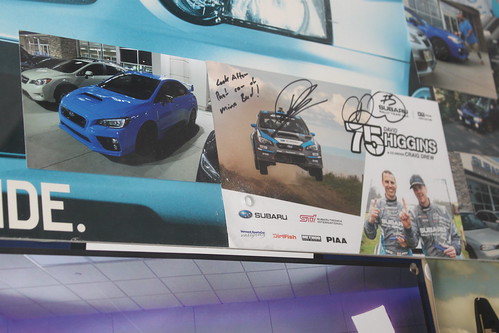 The wall will continue to grow and change. My experiences with Subaru are chronicled through each piece on this wall, so it's a fun reminder of great memories I've had so far.
[SIGPIC][/SIGPIC]


Sent from my iPhone using Tapatalk

Thanks guys! Forgot these three from the 2015 season. 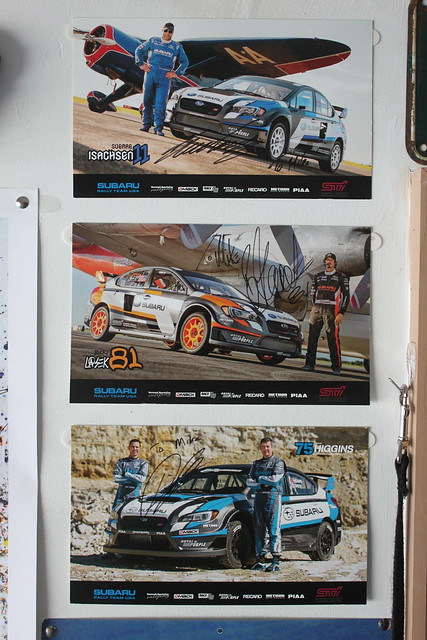 This is awsome
Rock on

:04ftw:
You must log in or register to reply here.

G
Where Do You Make Mods If You Don’t Have a Garage?

Looking to get back into the game